Vijayawada from Hyderabad: 2 States, 2 Rivers, a Sea and an Island!

(Google and the Google logo are registered trademarks of Google LLC, used with permission.)

Prelude: After one of us migrated to Germany for his higher studies and another to Italy for the same reason, those who were left decided to go on as many trips as possible together. We did not have any fixed destination in mind as we kept juggling among few previously agreed upon places; Pondicherry, Araku valley, Lonavla, Bapatla, etc. While fueling the car, made up our mind to visit Suryalanka Beach, Bapatla.

Started our Journey around 7 a.m. Did our breakfast at a roadside eatery near Gudrampalli, according to Ibrahim, These eateries preserve the original taste without adding any new flavours. Rerouted our trip to Manginapudi beach instead of Suryalanka Beach, Bapatla because we spotted Munneru River en route to Manginapudi also OYO was offering good deals in Vijayawada.

4 hours later, reached Nandigama where the Munneru River passes. Munneru is a left tributary of the krishna River and flows in the Khammam district acting as its water source. Just like we hoped, the river was clean, the water was fresh, crystal clear and cold. Indulged in water play(obviously).

Having our fill of fun, headed for Vijayawada. Playing in the water made us peckish, so stopped at a local market to buy some fruits.

Abdul Rab is accustomed to buying vegetables and he noticed that the prices quoted by the vendors were high. He wished to bargain but couldn’t due to the language barrier. Abdul Rab didn’t know Telugu, the vendor only knew Telugu. It was hilarious watching them converse. 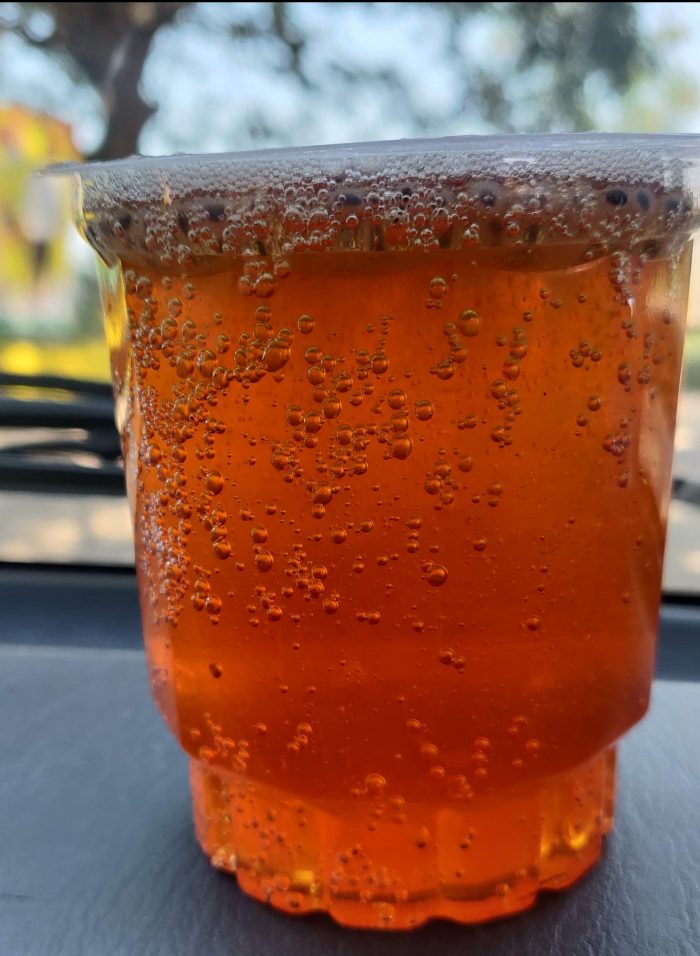 Discovered a local drink (non-alcoholic) by the name ‘Nannari Sharbath’. It is extracted from the roots of herb ‘Sarasaparilla’ and helps in keeping the body cool while also purifying the blood.

Headed towards Manginapudi Beach through state highway. Taking the state highway slowed the pace of journey but offered astounding countryside scenes. Lush green crops of Paddy, Cotton and Maize along with water canals and coconuts trees were a delight to see.

After a 2-hour drive through the countryside, arrived at the beach. Manginapudi Beach is situated on the coast of Bay of Bengal about 11 kilometres away from Machilipatnam. It seemed like an unregulated beach with litter and no lifeguards.

Abstract pattern made by crabs 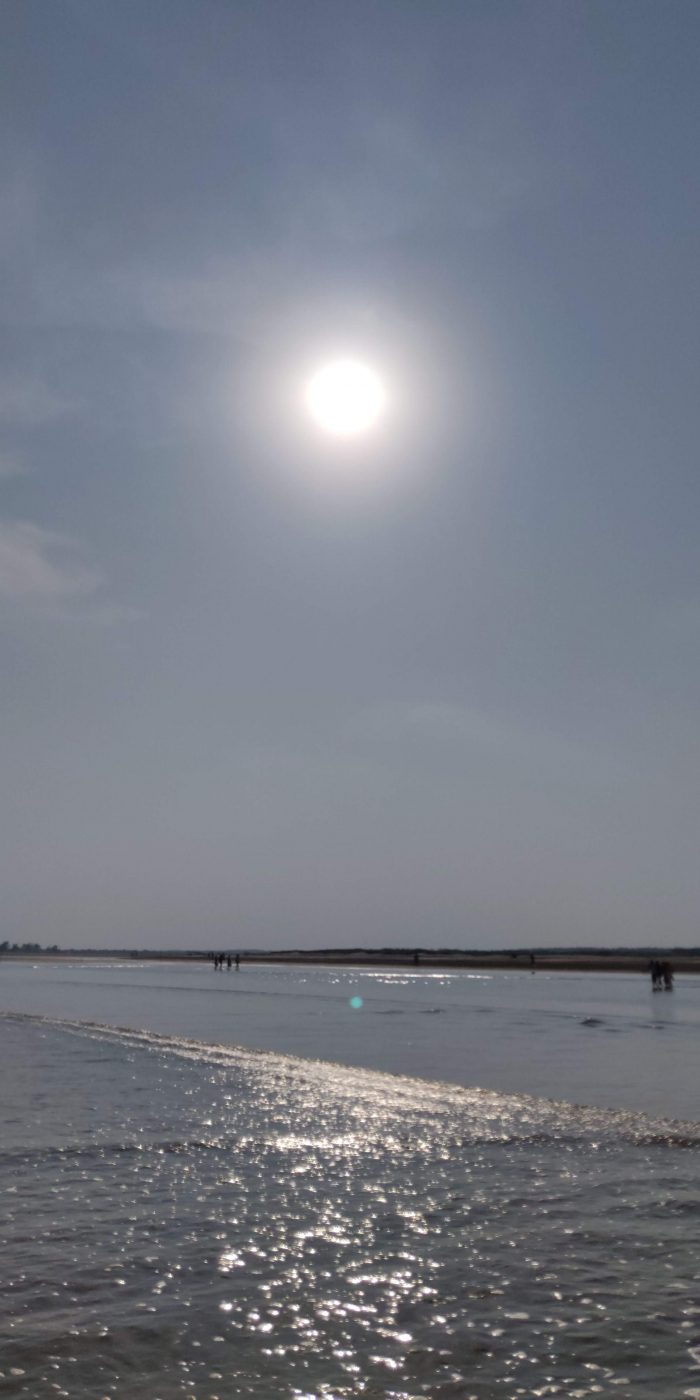 The water was opaque with some foam and the sand was brown. Small sand-bubbler crabs made their homes in the sand by digging, leaving behind tiny sand balls that made abstract shapes. Did enjoy a dose of beach life playing in the waves and soaking in the sun.

With sand stuck in our clothes, salt on our bodies and sea water in hair, we looked for a place to clean ourselves (remember unregulated beach). Finally, cleansed ourselves with the help of a hand pump located beside a road.

Looking through the windows, found the sunset over the crops to be pleasing with the sky turned pink and the fog covering the top of paddy fields. In the meanwhile, booked 2 rooms in G-Square hotel through OYO on our way to Vijayawada. This was our worst OYO experience till date owing to the kind of service we got from the hotel staff.

Vijayawada: The city of victory

Had our complimentary typical south-Indian breakfast at the hotel, started out to explore Vijayawada as planned in the previous night. The city of victory is lively with newly paved roads with little traffic, vibrant greenery and water bodies. Heavy construction of flyovers, bridges and commercial buildings was underway. it has Asia’s second largest bus station. People here displayed more civic sense compared to Hyderabad.

Connecting the two districts namely Krishna and Guntur is a 1.2KM long Prakasam barrage across the Krishna River. At the southern end of the barrage are a Fish market and park. Live fish, prawns and crabs were on sale at the bustling Fish market. Also, at the foot of the giant hill is Sitanagaram Park.

Situated in the midst of Krishna River and spanning an area of 133 acres, it is one of the largest river islands in India. This island can be accessed through boat service which operates at a frequency of 15 minutes.

We paid INR 60 per head for the round-trip. Maintained by Andhra Pradesh Tourism Development Corporation (APTDC), it offers water sports like speed boats, jet skis, banana boats, a children’s park, a bird zoo, maze, and for those who wish to stay on the island overnight, it offers beautiful tree houses.

It was our first time on an island. After a while, We couldn’t distinguish between the mainland and the island. while exploring the island, came across a children’s park where adults were strictly not allowed. But it did not stop us from trying some musical instruments that were installed there.

Soon after, we were at the entrance of a Maze. It took us a few minutes to complete it and reach the centre of it unlike what we had expected because it was our first time in a maze.

Searching for a way out.

Exploring the island made us hungry, there was a Haritha Resorts Restaurant and it was serving Vijayawada special Bamboo chicken and Pot biryani. Decided to have our lunch in the mainland as the restaurant was charging exorbitantly.

Googled for eateries and found Bamboo and Biryani (restaurant). Rushed to it to be told that all the bamboo chicken was consumed for that day but got a deal on biryani. Thoroughly enjoyed our scrumptious meal.

Right after our lunch, we set out for Amaravathi – The new capital of the newly formed state of Andhra Pradesh. Took the state highway; a single lane road that passed through fields of various crops and treasured the sights.

The road took us through villages and a lot of road construction was underway. Had to face a lot of dust and bad roads. finally, reached Amaravathi to realize that the work for the development of a smart city has not yet been started. Amaravathi was still a developing town.

After having our expectations of seeing the work in progress of Amaravathi crushed, We headed for Nalgonda which was a 4-hour drive. The sun was setting and it was mesmerizing to see the sun change its colours from yellow to orange and subsequently red before disappearing into the horizon. The feeling of pure tranquillity was in the air this evening.

When we entered Nalgonda, it was dinner time. Had Nalgonda prominent matka kulfi, coconut water and oranges as we were not that hungry thanks to the 2+1 Biryani offer.

At last, We were back to our City of Pearls after a 100-minute drive. The first thing we noticed was the traffic then came lack of civic sense. Arrived at our place around 2300 hours finishing our ~800 kilometres journey in 2 days.