It was the D day for the trip which was probably the last trip we would be on, together. One of them was headed to Germany for his masters and to eventually settle there and another was headed to Italy for almost the same reason. As time passed after graduation, everyone knew in the back of their minds that responsibilities of life would create distances between them and in time, getting together for long trips like they did in the past would become almost impossible.  It was now or never. Everyone had dinner at their respective homes and gathered at around 8 p.m. in the car and in unison enquired, “Where are we headed?”. We had a list of places in mind including Aaruku valley, Lonavla, Warangal, etc. During the discussion, we were reminded of a friend who was working in Bangalore and wanted to join us. We called him up and asked him if he would be interested to join us on the trip and he immediately agreed. We decided to go to Wayanad and pick that friend on the way.

On the night of 22nd of June 2018 with a heavy downpour and pitch darkness around, the journey began! We drove the entire night on NH44, taking turns sleeping, speaking and singing. At around 8 a.m. after driving about 575kms with petrol that cost us INR 2,300 and paying INR 870 in toll, we reached Bangalore and were welcomed with the traffic. After having breakfast and freshening up, we went to pick up our new companion for the journey ahead.  We were headed to Electronic city which was roughly in the south of Bangalore and we had entered Bangalore from the North, which meant we had to drive 40kms in Bangalore traffic. To put it in terms of time, it could take us a couple of decades to cover that distance.

With a new passenger on board at noon, we were now on the Nice Road, which is a toll road that connected us to the Mysore Highway and generously charged us INR120 for the service. It took us about 4 hours to reach Mysore because there’s plenty of traffic in towns that the highway passes through, during which we booked an OYO in Sultan Bathery that cost us INR 3,700 for two rooms with extra beds and free breakfast and a pool. Traveling through the ring road and skipping the main city, we were going towards Gundlupete, where we planned to turn towards Kerala instead of Tamil Nadu. Since we had skipped lunch and were hungry, we stopped to have some amazing South Indian food at Nanjanagudu.

Right after Nanjanagudu, we were welcomed with acres of sunflower farms. It was a wonderful sight. A definitive location for a Bollywood song! 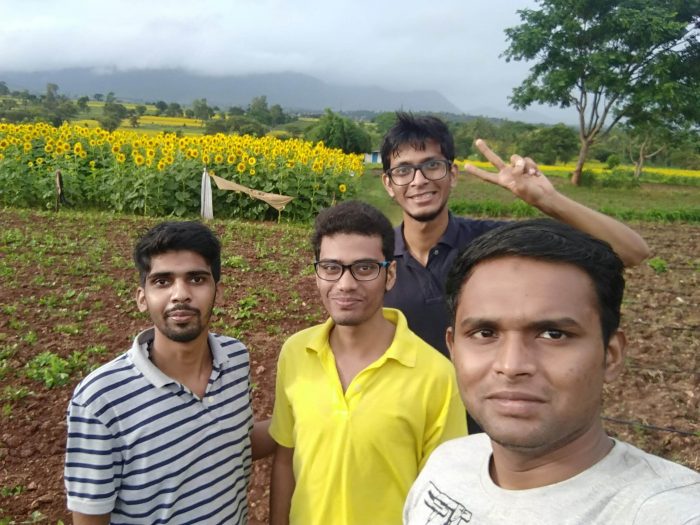 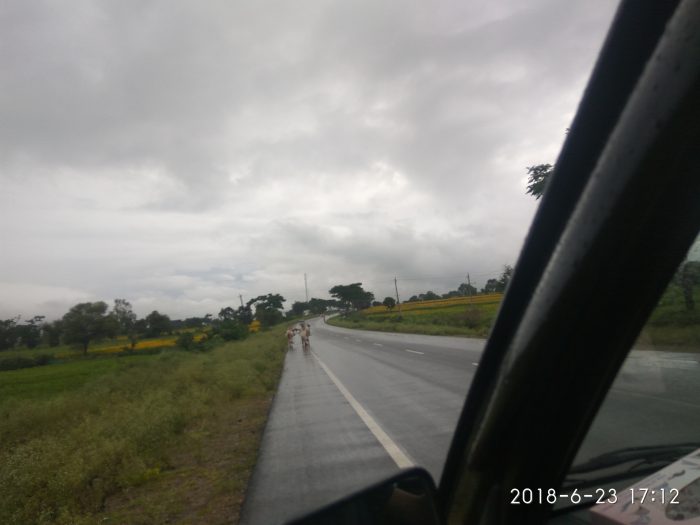 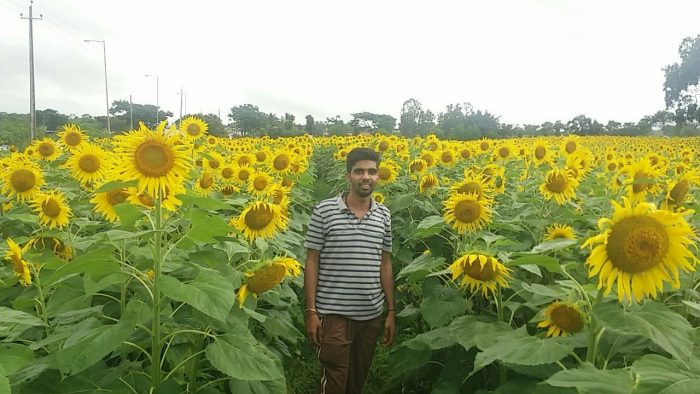 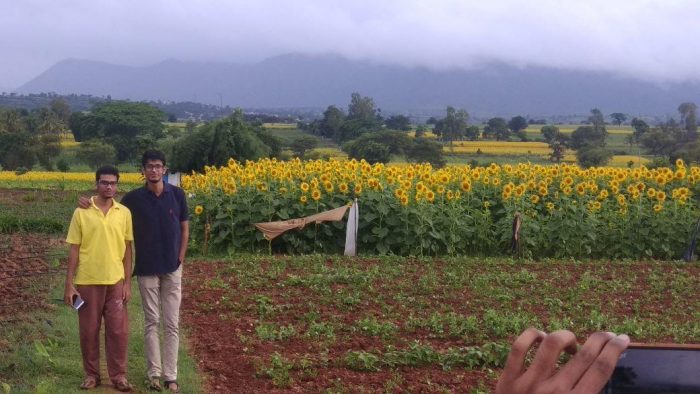 At around 6:30 we entered Bandipur Tiger Reserve and National Park and were lucky enough to spot Deers, Elephants, Wild Boars and Bison. After continuously traveling for the past 18 hours, we finally reached Waynad. Checking in took about half an hour and a couple of friends went to get dinner and others entered the indoor playroom. Some incredible dinner coupled with exhaustion quickly put us to sleep.

How we got a 4-star hotel with free breakfast, swimming pool and indoor games for 75% off!

The hotel that we got at a great deal through OYO was a 4-star hotel that had the “Premium OYO” tag with it. The thing is that OYO had a summer deal(50% off) and if there’s a room available and the hotel doesn’t want to leave it empty for the day, they drop prices. Similarly, there was another way we saved that is OYO money! There’s a feature called OYO money and if you refer a friend then both of you get 1000 OYO money. As a result of 50% off + dropped prices + OYO money, we got 2 rooms in a 4-star hotel for INR 3,700!

At 7 a.m. we woke up to a delightful scenery of the hotel with a backdrop of hills covered in fog and decided to enter the pool. After the refreshing swim, it was time to have breakfast. 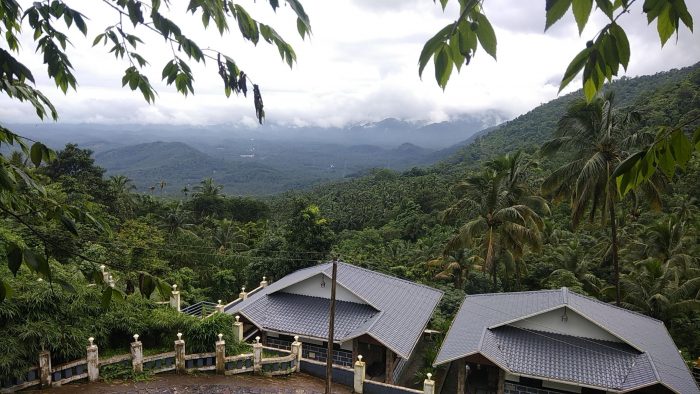 View from the hotel 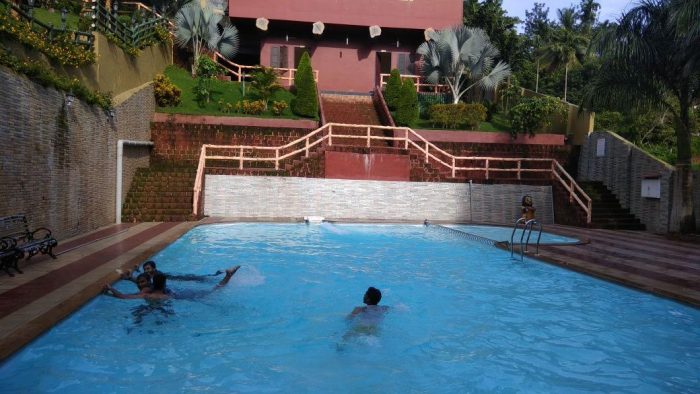 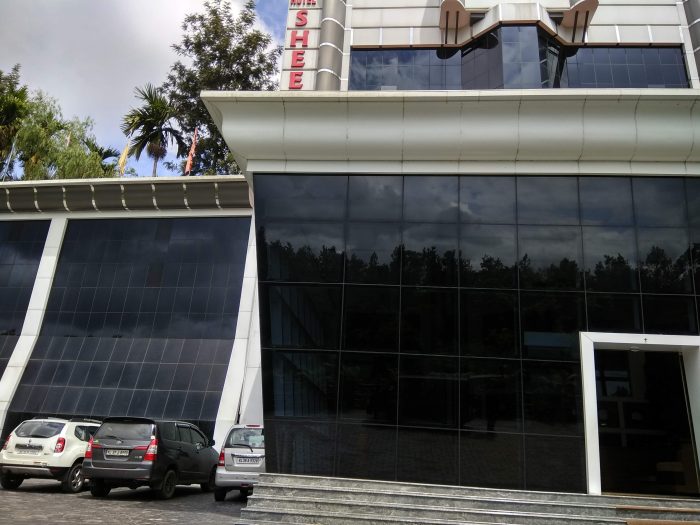 During breakfast, we planned our day ahead and decided on visiting Kozikhode which was about 100kms from where we were. After checking out at 11 a.m. we hopped on our ride to see the Lakkidi View Point.

There were light showers of rain every few minutes but the roads were well maintained which made the journey pretty enjoyable. On the way, we visited Pookode Lake and went boating on it. 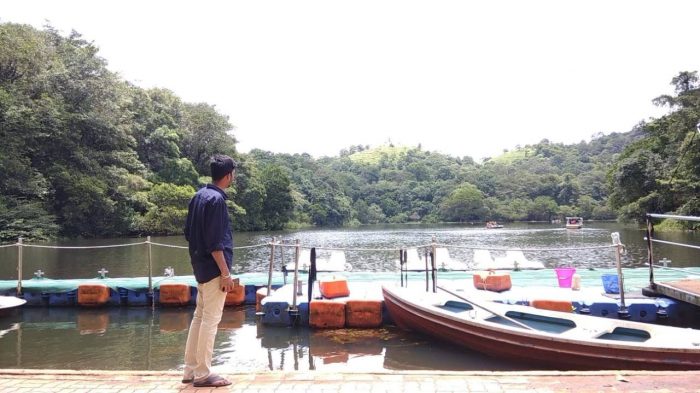 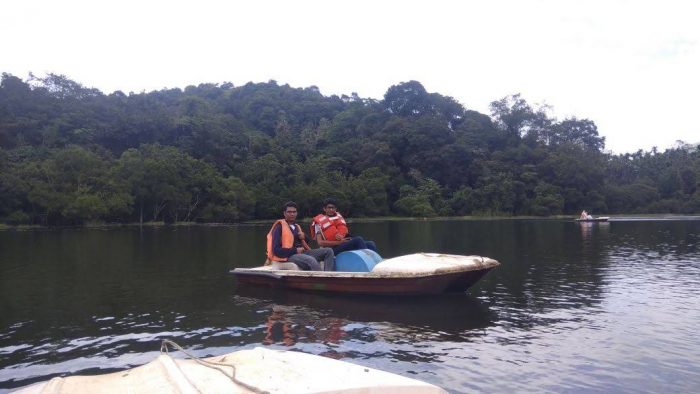 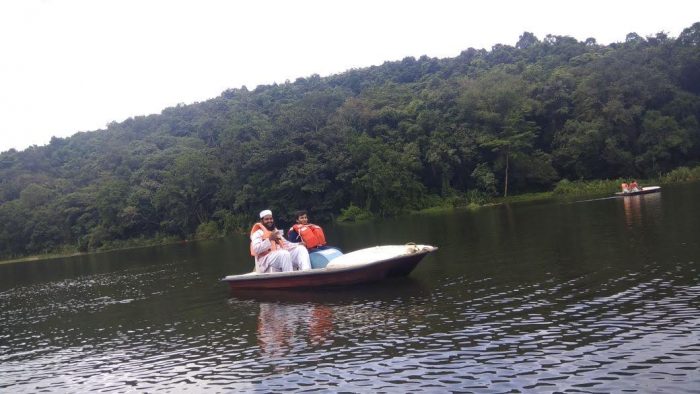 When we reached Lakkidi View Point, the whole View was obstructed with dense fog prompting us to park the car for at least half an hour and wait for the rain to subside. Driving through those ghat roads was a surreal experience which left us mesmerized. On the way to Kozikhode, we halted for lunch at a restaurant where we were served warm water which was quite confusing and a first for us. Then we were reminded that Nippah Virus’ outbreak in Kerala had originated from Kozikhode a few months ago. We foolishly had entered the epicenter of the outbreak joking all the way about catching the Virus.

We reached Kozikhode beach at around 5 p.m. Locals were playing football on the beach and invited us to join them. 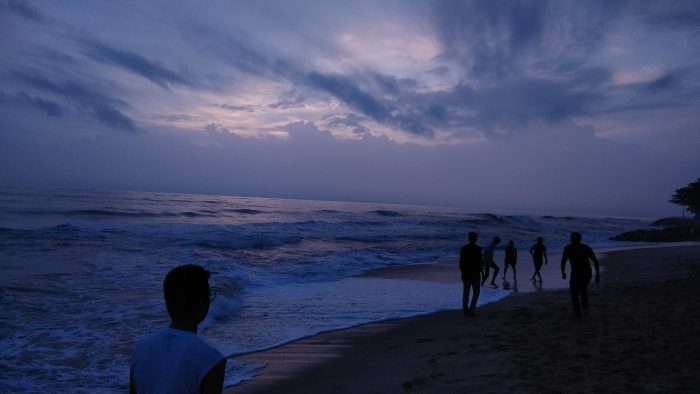 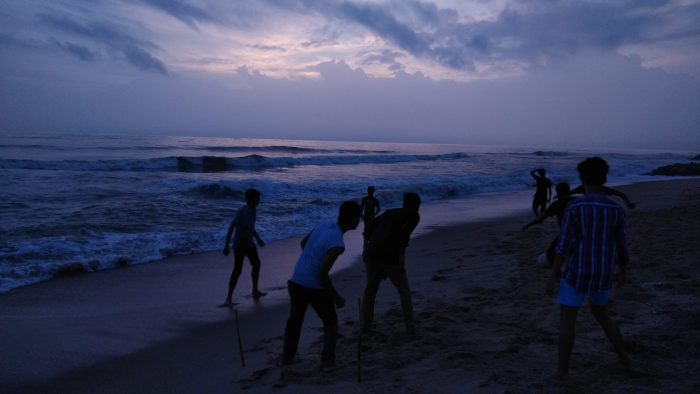 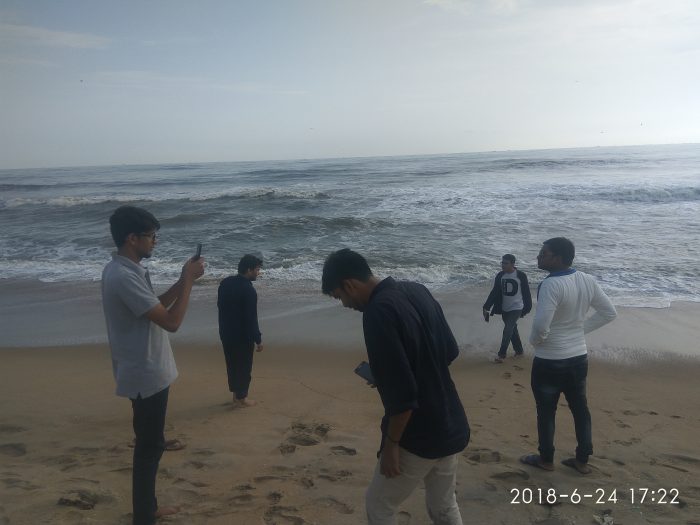 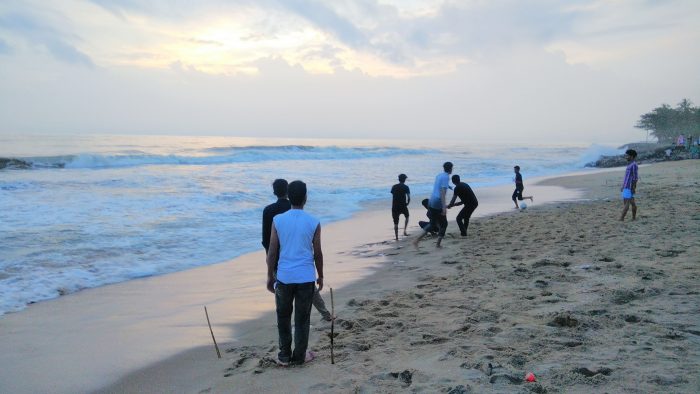 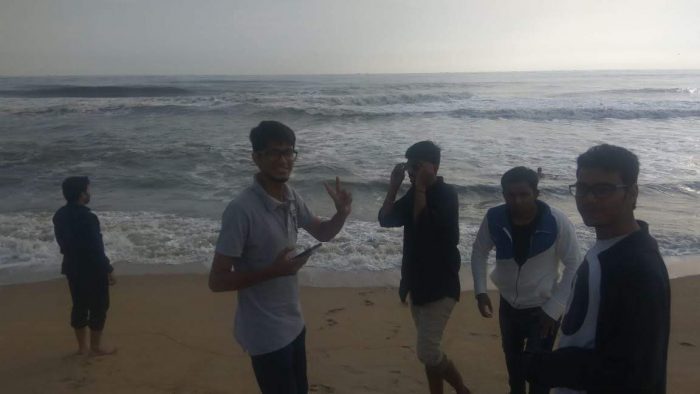 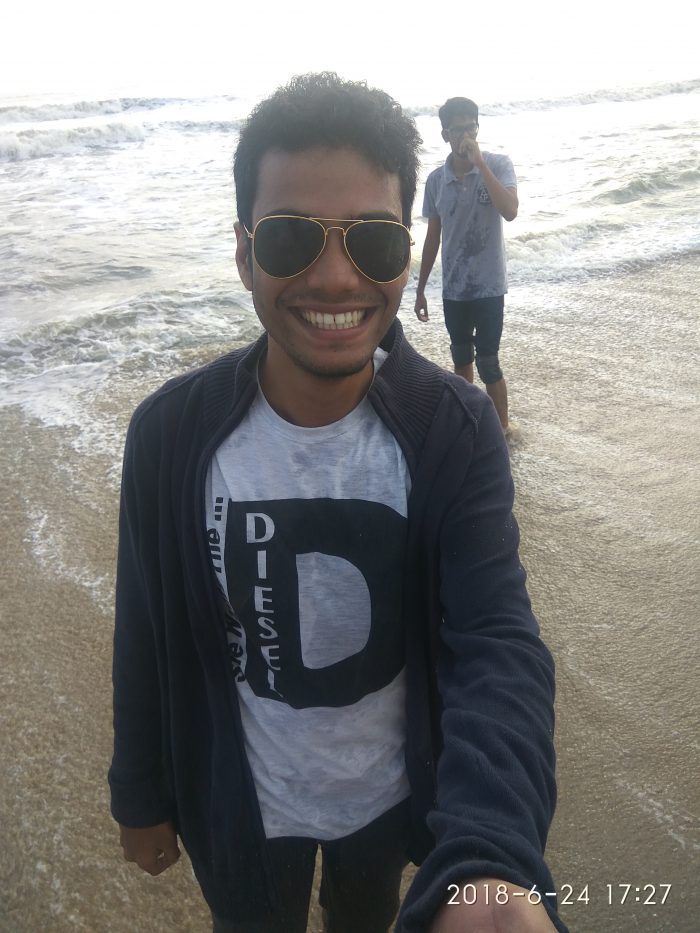 We played till sunset and then realized that we had no place to stay for the night. Traveling the entire day and playing on the beach had left us with no other choice than to look for a place to stay. All of us started to use different services to book rooms but we couldn’t find a place that met our expectations and budget. We went to a couple of hotels whose rooms had beautiful images online but turned out to be completely opposite in condition. It was almost 9 p.m. and we were roaming on the streets contemplating our next move. Suddenly an idea struck us, why don’t we look for places to stay in nearby towns. After extensive searching, we found a place near Calicut International airport. It was about 35kms from where we were and had an incredible last-minute deal on OYO rooms (INR 2,000 for 3 rooms with AC and free breakfast).

After the breakfast, served in the rooms, we checked out and were bound for Mudumalai National Park. New Amarambalam Wildlife Sanctuary had beautiful ghat roads with scenic views of hills covered with forests. 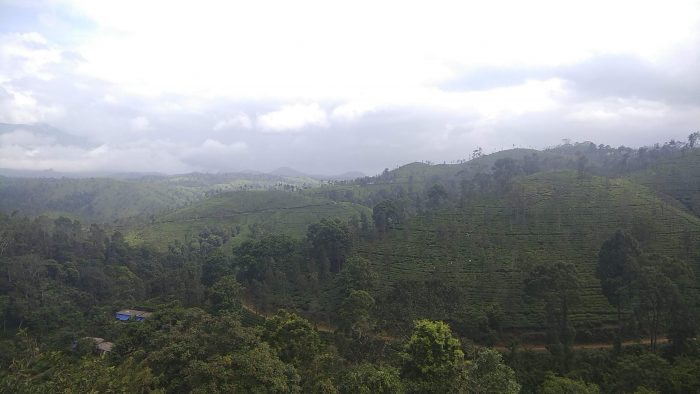 In Tamil Nadu, we stopped for a tea break. We noticed that people were having meals in a house that was half restaurant and half home.  Likewise, we had meals in that house and we bought Avocados for INR 60 per kg from them. They crushed the avocados, mixed in milk and sugar and packed it up for us. After lunch, we called up the owner of a resort called Wild Haven in Mudumalai near Masinagudi and asked him if there were rooms available at his place. With an affirmative answer, we headed to Wild Haven. Checkout the article when we first visited Mudumalai National Park and went on a safari.

Wild Haven has always been a favorite of mine. It has loads of memories associated with it, ever since I was a kid. We got our cottage, went to the watchtower to spot wild animals. As the sun set, we headed back to our cottage. After a few hours, we went to sit near the Bonfire and listen to stories of the jungle from Mr. John, the owner of Wild Haven. 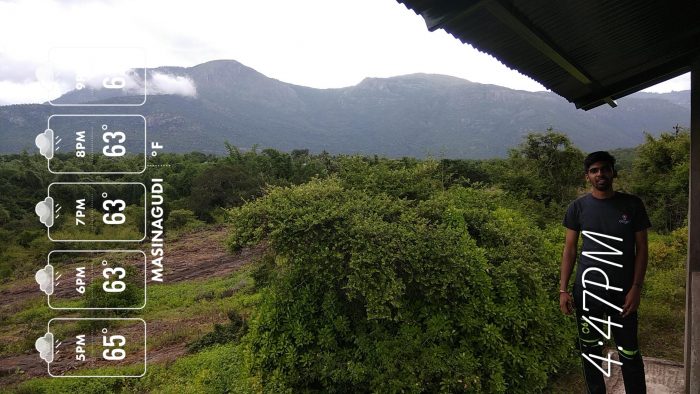 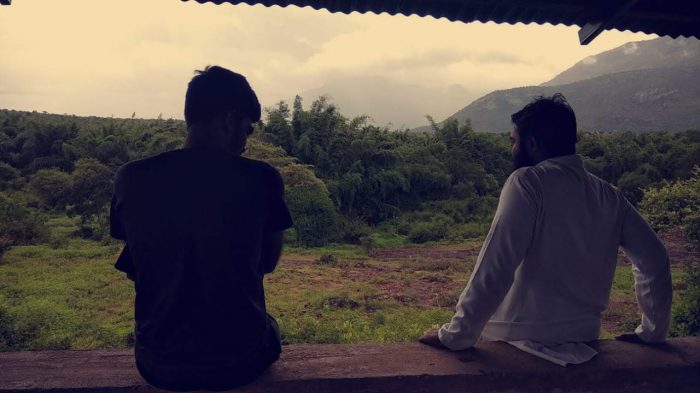 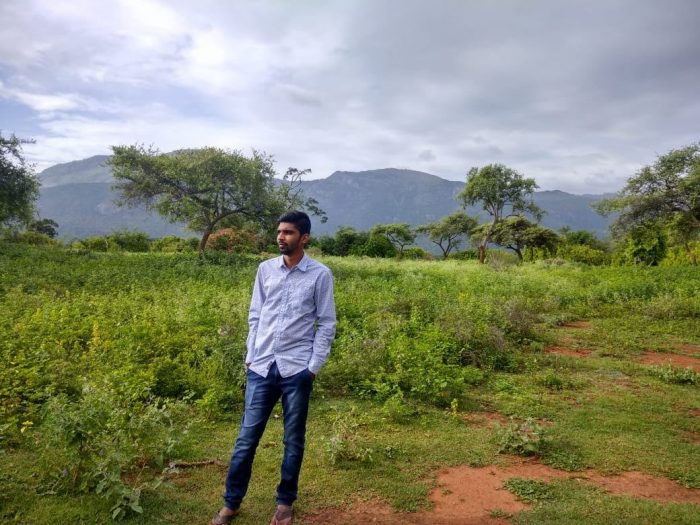 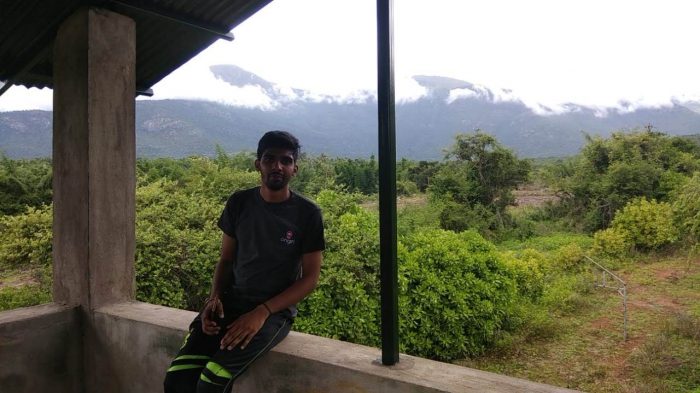 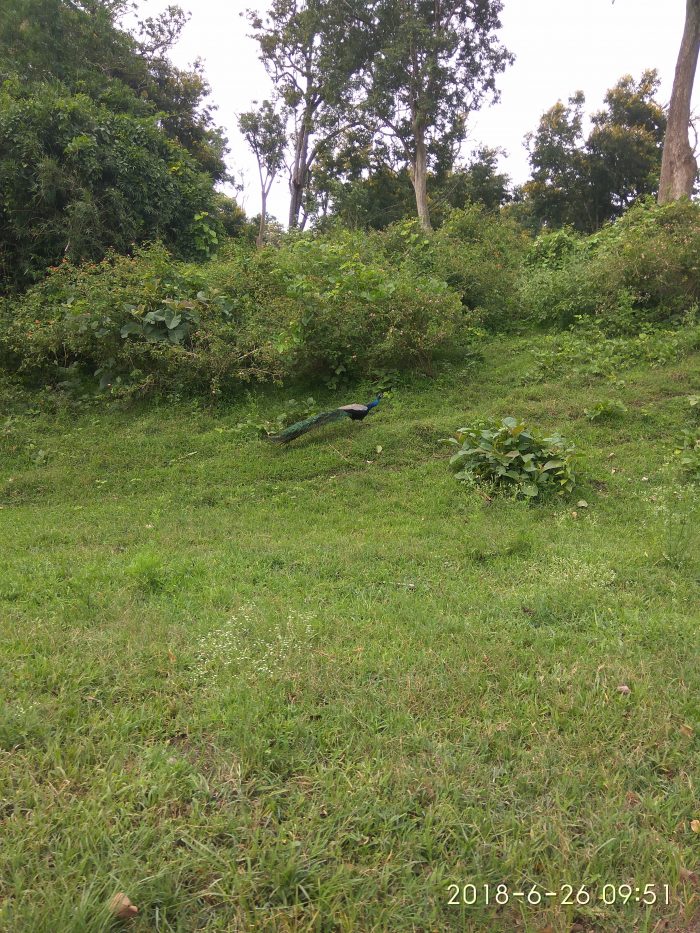 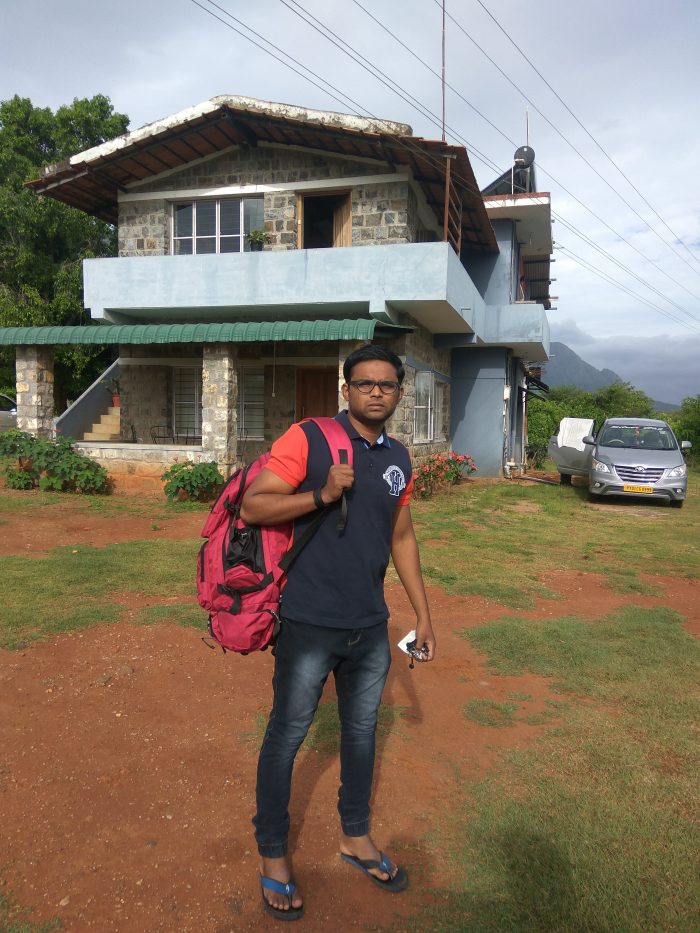 We also played carom while waiting for dinner to be ready. After dinner, we were done for the day and drifted off to sleep or at least a couple of us, others had an amazing idea. They wanted to watch a horror film in the middle of the jungle in the middle of the night. They got so scared that they couldn’t sleep the whole night and kept “hearing” things.

Next morning, we checked out and had breakfast on the way at Masinagudi. The next stop was going to be in Mysore which is about 3 hours from Masinagudi. We drove through Bandipur and reached Mysore just in time for lunch. Found a wonderful buffet deal at Empire in Mysore. INR 199 per person! 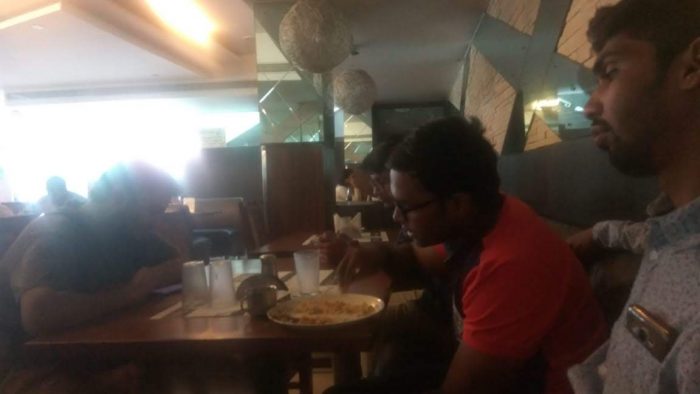 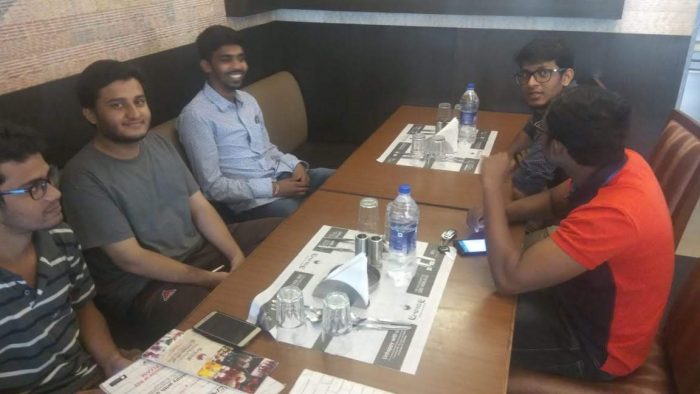 After spending a significant amount of time at the restaurant, we started our journey back to Bangalore. It took us about 4 hours to reach Bangalore where we dropped that friend and made a beeline for Hyderabad.